The Craftsmanship of Estremoz clay figures just inscribed on the UNESCO´s Representative List of the Intangible Cultural Heritage of Humanity. 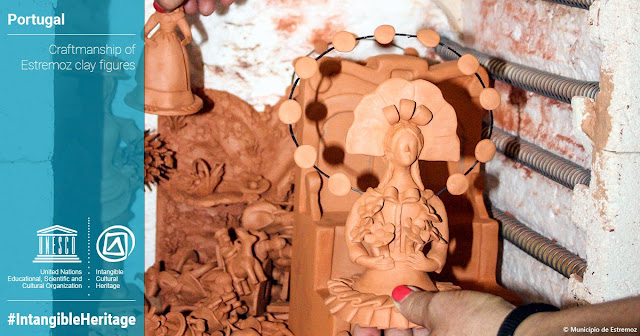 “The Craftsmanship of Estremoz Clay Figures involves a production process lasting several days: the elements of the figures are assembled before being fired in an electric oven and then painted by the artisan and covered with a colorless varnish.

The clay figures are dressed in the regional attires of Alentejo or the clothing of religious Christian iconography, and follow specific themes. The production of clay figures in Estremoz dates back to the seventeenth century, and the very characteristic aesthetic features of the figures make them immediately identifiable.

The craft is strongly attached to the Alentejo region, since the vast majority of the figures depict natural elements, local trades and events, popular traditions and devotions. The viability and recognition of the craft are ensured through non-formal education workshops and pedagogical initiatives by the artisans, as well as by the Center for the Appreciation and Safeguarding of the Estremoz Clay Figure.

Fairs are organized at the local, national and international levels. Knowledge and skills are transmitted both in family workshops and professional contexts, and artisans teach the basics of their craft through non-formal training initiatives. Artisans are actively involved in awareness-raising activities organized in schools, museums, fairs and other events.”